The Beatles on the Minehead Branch...

In March 1964 the relatively peaceful surroundings of Minehead railway station were shattered by the screams of hundreds of schoolchildren. Teachers at local schools gave in to demands for time off from the classroom and a large crowd of excited teenagers gathered by the railway tracks. And the reason for all this excitement? The Beatles were in town shooting scenes for their first movie 'A Hard Day's Night' and no one was going to miss the chance to see their heroes!

On the morning of the 2nd March 1964 a special charter train of 5 coaches trundled out of London's Paddington station heading for Minehead. On board were a motley crew of film technicians under the command of director Dick Lester, some well known actors like Wilfred Brambell (Steptoe), John Junkin, Norman Rossington and Richard Vernon and four lads from Liverpool - John, Paul, George and Ringo.

The purpose of this train journey was to film the first 20 minutes of a new movie showing the events of a typical day and a half in the life of the Beatles. On that Monday morning the film did not have a title and was referred to by all as 'Beatles Number One'. Ringo came up with the title 'A Hard Day's Night' recalling a tough all night session in the recording studio. The film was commissioned by Hollywood studio United Artists as a 'quickie' to capitalise on the Beatles popularity in the UK and to generate a best-selling soundtrack album of new songs by the Fab Four.

Beatlemania had swept the country in 1963 and in early 1964 had reached America with the group's first appearance on the Ed Sullivan Show attracting a record 73 million viewers. They had plenty to smile about with 4 UK number one hits under their belt by the time they arrived at Minehead to a sea of devoted fans. Among the crowd was Sheena Reed (nee Hudson) who related the day's events in a letter to her grandmother.

"We all ran down to the railway line and had to cross a field to reach it" she wrote. "When we arrived there was a terrific crowd, all screaming and shouting around the train. Somehow we found the exact window that the Beatles were in and, as can be expected, there was an extra large crowd there. Some of our crazy sixth-formers raised a banner saying 'Your kingdom is crumbling' and 'Viva Brahms'. The Beatles looked out of the window and pulled faces. My friend Sandra said when she saw their faces she just had to pull the banner down. When the Beatles saw it gone they all started clapping. They were eating dinner all the time we saw them."

Eventually Sheena and her friend reached the train and Paul waved and smiled from the window. In the excitement Sheena lost a shoe and Paul pointed at her foot and laughed. Her picture, minus shoe, appeared in the next day's Western Daily Press under the headlines 'The Beatles go West' and 'A break for bubbly makes their fans late for school.' Other newspaper headlines were even more sensational and included '500 girls in Beatle battle.' The arrival of the Beatles and the crowds of fans were filmed by a BBC Points West crew and were reported on the BBC's national news.

At other stations down the line the crowds turned out despite the route of the train being kept a secret. At Crowcombe the film crew halted to shoot a little scene where the Beatles run along the platform shouting to a retired army officer (played by Richard Vernon) "Hey mister, can we have our ball back?" This was put into the film as a surreal moment by Dick Lester to give the audience the nod that this movie was going to be different and not another 'Summer Holiday'.

In July the film opened to great critical and commercial success with premieres in London and Liverpool and nominations for two Academy Awards. It succeeded in establishing the characters of the four Beatles and helped to boost the massive industry that built up around them. On sale were plastic Beatle wigs, wallpaper, playing cards, lampshades, fan magazines as well as the records themselves. Their career together lasted until 1970 and today they have a worldwide fan-base with their CD's available in every record store on the planet. Sales of singles in the UK eventually reached nearly 21 million and total global sales of all records have topped one billion earning the Beatles a huge fortune.

Much has been written about the cultural impact of 'A Hard Day's Night', which was described by US critic Andrew Sarris as 'The Citizen Kane of jukebox musicals'. It broke the mould and established Dick Lester as a leading film director with successes such as 'Help' (with the Beatles again), 'The Knack' and 'How I won the War' with John Lennon. 'A Hard Day's Night' was bought by Miramax Films in the 1990's from producer Walter Shenson and restored to its former glory with a cinema release in the US earning another million dollars to its tally. It is now available on a two-disc DVD with documentaries including shots of the events at Minehead that March morning all those years ago.

The Beatles split up at around the same time that the Minehead branch line closed to passengers. Now over many years later the Beatles are more popular than ever and the railway in its role as a tourist attraction is carrying record numbers of passengers. You can still trundle down the branch to Minehead behind a 1960's Hymek diesel sitting in a comfortable 1950's Mark One carriage just as the Beatles did decades ago.

In 2007, film director Richard Lester came back on the Minehead Branch for the first time in over 40 years. On Wednesday 6 December 2007, Richard and a BBC unit visited the West Somerset Railway for the filming of a new series 'A Comedy Map of Great Britain'. Lester directed the first Beatles film, 'A Hard Days Night', one scene of which brought the Fab Four to Crowcombe Heathfield on the Minehead Branch, then still worked by British Railways. A special train, hauled by GWR 2-8-0 no 3850, was laid on for Lester's 2007 visit to allow in-train filming. 'A Comedy Map of Great Britain' was later shown on BBC2. See pictures link in right hand panel...

The Fab Four in Somerset 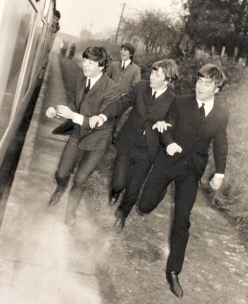 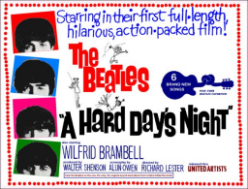 That's me in the picture
BBC Antiques Roadshow, Minehead and The Beatles
A short YouTube clip
Beatles Links